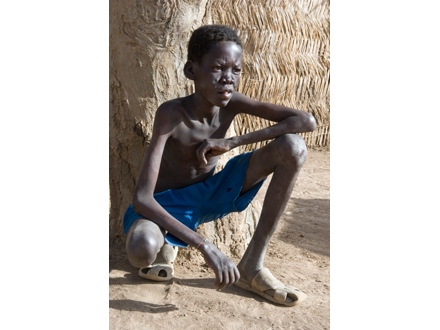 Deep in the desserts of Sudan, a small boy sits in the shade and tastes an M&M for the first time. It makes him smile, and a Bridge of Hope missionary empties the bag in his outstretched hands. He beams.

His name is Kuol Kuol, a former slave in the vicious cattle camps of the Muslim Janjaweed militia. It is a treacherous life where only the strongest survive and those deemed too weak are left to die in the wild. But today he is free; free to smile, free to dream, and free to live. All thanks to God working through BOH ministries and you. Your gifts give life, bring hope, and show God's love to the world.

When BOH found him, he could still feel the sting of the bamboo stick across his back. Diagnosed with severe malnourishment and the beginning stages of leprosy, this boy should have died in that slave camp. But he didn't. Due to the treatment he received from our doctors and the nearly 2.7 million pounds of food you helped us send across seas, Kuol Kuol gets stronger everyday and the majority of damage caused by the leprosy in his face will be completely repaired. Clearly, God has a greater calling on his life.

He, along with the other tens of thousands of newly freed slaves, can now begin to build a brand new life in health, happiness, and hope. A life free of terror, abuse, and abandonment. A life indebted onlt to Christ, the merciful master, to whom we all owe it all.